If one picture is worth a thousand words…

…than how many words does a live video merit? Think about it. Are you more likely to remember the radio broadcast of a championship game or a live television broadcast of that same event? As with many things, the Apollo program presaged our love for video – no wonder why the producers of MTV chose an image of an Apollo moon man as its logo!

Ironically, it took four years for a camera to make it inboard a US manned spacecraft. With the need to remove any unnecessary weight from the crew’s cabin, NASA engineers – with the nodding approval of the unwary astronauts who piloted those rockets – found the camera a luxury too heavy to carry. Still, with the moon landing approaching, William A. Lee wrote in the spring of 1964, “It may be assumed that the first attempt to land on the moon will have generated a high degree of interest around the world. . . . A large portion of the civilized world will be at their TV sets wondering whether the attempt will succeed or fail.” (source: history.nasa.gov/SP-4205/ch11-4.html)

Unfortunately, the tragedy of January 1967 may have only attracted more viewers. With Apollo 7 representing American’s first manned flight since the loss of Grissom, Chaffee and White, interest in the mission grew more intense. Once space borne, though, the professionals in the cabin placed work before play, and flight plan changes led spacecraft commander Walter Shirra to cancel the first of several planned broadcasts. However, when the red light finally turned on, what a show it turned out to be! With cue card one-liners (“Keep Those Cards and Letters Coming In, Folks” and “Hello from the 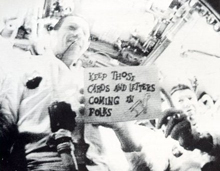 Lovely Apollo Room High Atop Everything”) provided courtesy of Michael Kapp, (producer of the Bill Dana “Jose Jimenez in Orbit” record album in the 1960s), the crew left America – and the world -with a fond smile in their hearts and NASA with a public relations coup.

From that point on, TV cameras no longer looked too heavy and NASA has equipped every manned space vehicle with them since. Television viewers across the globe saw the human story of space, and many astronauts – at least for a short time – became folk heroes. Today, NASA even has its own channel, NASA TV.

The ACIS data suggests cosmic rays come not from the birth of atoms, as originally proposed by Robert Millikan, but from the death of stars. […]

Who knows where the world would be today without this small, but ingeniously practical, tool! […]

We might have discovered this six years earlier if not for a glitch. Of the thousands of commands sent to Pioneer 10 during the 24 days of its Jupiter encounter, only one was lost due to those radiation belts. It could have been one just like this. […]