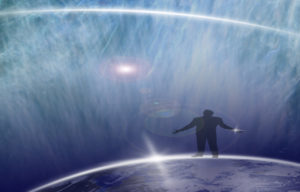 From the beginning of time, the untouchable stars above controlled man as he lay prone to their eternal mercy. They could rain death and destruction. Yet, for all the punishment they delivered, the evening sky also represented man’s greatest reward – earning an immortal place among those distant lanterns scattered in the dark dome of night.

While ancient religions may have left man a mere servant to the gods above, they also left an enduring legacy the science of astronomy uses to this day. We can trace much of our epic advances – from planetary motion to stellar distances – to the mathematics and geometry that make up an important part of both astrology and the constellations.

Still, it’s hard to erase the psychological scars wrought by centuries of mythology. For all the revelations during the Age of Reason, and despite the growing intellectual awareness spawned by the Age of Enlightenment, space remained a mysterious place for the popular imagination. H.G. Wells transformed the gods of mythology into the monsters of science with the publication in England of War of the Worlds at the end of the nineteenth century.

Orson Welles Americanized the classic story of the Martian invasion by changing the physical location (from London to New Jersey), the medium (from printed literature to radio theatre) and, most significantly, the style (from a scientific journal to a live action news report). Still, the monsters remained. More importantly, the lessons also remained: The first, (and most satisfying given what those nasty aliens did to our species – at least until you realize those creatures represent a metaphor for mankind): Even the mighty can fall to the smallest of microscopic organisms. Hooray! David beats Goliath! Of course, we learn this only after the blunt message (for those who would inevitably fail to understand the metaphor of the first lesson) that man, for all his glory, stands as a tiny grain of sand against the naked might of the universe.

And so science fiction stayed – mortal Earthlings battling various unbeatable space-borne monsters. For the most part, the fine arts literati snubbed the pulp genre until 1951, when The Day the Earth Stood Still brought an entirely new dimension to the field. Notwithstanding Orson Welles’ radio interpretation of War of the Worlds, the stories written and produced during the Golden Era of Science Fiction could have easily been mistaken as westerns if only chaps and leather replaced the tinfoil suits and glass helmets. You know, good guys versus bad guys, white hats versus black hats, damsels in distress, lots of action, happy ending,… that sort of thing. The Day the Earth Stood Still went where no science fiction production had gone before. It successfully employed the genre to metaphorically explore a grave contemporary issue. Within two decades, Gene Roddenberry would use the television series Star Trek to accomplish the same thing.

Of course, even though The Day the Earth Stood Still represented a watershed of cinematic import, it merely brought our popular culture theme back to the idea things in outer space governed the destiny of man. Only now, we’ve jettisoned the idea of all-powerful monsters and gone back to concept of the all-powerful gods. Well, at least we no longer considered them gods. They were aliens. The turning point came with Forbidden Planet. The 1956 science fiction movie made two significant contributions. First, it showed the dramatic story of space can be told using a conventional drama. In this case, Forbidden Planet borrows heavily from Shakespeare’s The Tempest. Second, the movie ends with a dramatic reversal of man’s place in the universe. Yes, god-like aliens and omnipotent monsters may inhabit the universe, but the ultimate creator of either good or destruction – the true god or monster – is man himself! Holy Bambi, Batman! Man has entered the universe!

But, if the human race was destined to rule – or destroy – space all by its lonesome, one might presume the species would first have to live there in comfort. And what better way to portray this inevitability than with a palatable situation comedy aimed primarily at children? More precisely, a cartoon. Hot on the heels of The Flintstones’ success, Hanna-Barbera decided to reach for the other end of the chronological scale by producing The Jetsons. Though this 1962 series lasted only one season, its twenty-four original episodes continued in syndication ad infinitum (and some would say ad nauseum). A generation learned to treat space as just another Mayberry. Well, OK, that might be a stretch. How about at least as just another Bedrock.

Astronomy in popular culture perhaps hit its highest point with the classic television show Star Trek. The show brought drama, action and morality tales together for one hour each week from 1966 to 1969. Oh, and did we mention it took place in space? With the series, man no longer automatically cowed to various gods and monsters. Man rode starships as a peer – sometimes better, sometimes worse – with all the other critters in the universe. After all, in space, we learned, you have to deal with the same sort of problems you have to deal with in, say, Iowa.

So, if space represented the final frontier, what existed beyond it? Star Trek tried to address this with a can-do optimism. On the other hand, Arthur C. Clarke’s 2001: A Space Odyssey strived to reveal an epic answer. The movie suggested, much like most of the author’s other works, the answer to man’s ultimate question lay somewhere in the dark depths of the universe. While The Jetsons and Star Trek painted space in much the same way Hollywood normally pictured everyday life, 2001: A Space Odyssey combined great storytelling with believable NASA-like representations of space and space exploration.

Then, something amazing happened. All that imaginary speculation of space travel and walking on distant worlds became real. When Neil Armstrong stepped on the moon on July 20, 1969, mankind’s most vexing questions were answered. No, the lunar module did not sink in the super soft moon dust of the moon like a baby in a ball pit. Yes, we had the technology to get there and back. No, the moon is not made of green cheese. After nearly a decade of space as a normal environment, is it any surprise that Alan Shepard became a hero to duffers worldwide when he took several swings with a six iron on the sands of the Fra Mauro highlands?

The public fascination with all things spacey and astronomical led to the popularization of astronauts, aeronautical engineers and, amazingly, even astronomers. Johnny Carson took a liking to an eccentric astrophysicist from Cornell University, and Carl Sagan became the de facto spokesman for the space age. The professor parlayed his celebrity into a thirteen episode venture called Cosmos. This PBS show brought the wonders of astronomy and space exploration into the homes of all Americans throughout the fall of 1980. After years of watching the drama of the universe, the science of the universe had finally entered the popular culture.

Over the next two decades, from The Right Stuff to Apollo 13 to October Sky, popular cinema added to a growing portfolio of drama-in-real-life space ventures. Sure, we had our share of ETs and Aliens, but the public long ago recognized science fiction merely used space as a convenient backdrop. This trio of wide screen wonders weave memorable space sagas not from the realm of fantasy, but from the chronicles of history. They each tell their stories not in the faux-news style of The Day the Earth Stood Still or Orson Welles’ War of the Worlds, nor in the faux-science journal style of the original War of the Worlds, but more in the dramatic flavor of Forbidden Planet and the best of the Star Trek episodes.

Most significantly, these recent movies do not show nature conquering man, like astrology and the constellation mythology long ago started and later science fiction emphasized, but demonstrated reality-based tales of how man overcame both himself and nature; thus, faithfully capturing the promise of Star Trek and the hope of 2001: A Space Odyssey. Finally, their critical acclaim and box office appeal proves, when it comes to astronomy and space exploration, mankind is fast approaching the day when the “space is where we live” mentality of The Jetsons will become truth.

Unfortunately, the tragedy of January 1967 may have only attracted more viewers. Interest in Apollo 7 grew more intense. And when the red light finally turned on, what a show it turned out to be! […]

Unknown to all at the time, her discovery would forever change our understanding of the universe. […]

The ACIS data suggests cosmic rays come not from the birth of atoms, as originally proposed by Robert Millikan, but from the death of stars. […]